Another trip to Guangzhou


Six months after my treatment in Fuda Cancer Hospital, I had the opportunity once again to go to Guangzhou for immunotherapy treatment. Immunotherapy is a procedure to strengthen the immune system in the body. For cancer patients, their immune system is not as strong as ordinary people whereby the t-cells that act as soldiers to destroy cancer cells have been reduced. For this immunotherapy, 60 ml of blood is taken from our body, get the t-cells and culture to propagate the t-cells.  After eight days, the cultured t-cells will be infused back into the patient's body. Hopefully the bone marrow will then make new cells with lots of t-cells, which in turn, will destroy the cancer cells in the patient's body. The body's immune system will function normally and will destroy cancer cells naturally.  As the result, the patient will be free of cancer.


My trip to Fuda this time took two weeks.  This time only me and my sister went there and we took Airasia and as usual, the representative from Fuda came and picked us up at the airport.  We arrive at the hospital at night and felt a bit strange because it was not like the hospital we experienced before.  The next morning we knew that we were in South Fuda, the first Fuda hospital, rather than in North Fuda.  Apparently, doctors and nurses on the 6th floor of Fuda North, moved to South Fuda and we followed suit.  Facilities offered are approximately equal to Fuda North, but there is no halal corner in Fuda South.  Therefore, we have to cook our food at the roof top of the hospital building.

When a CT scan was done, they found a lump of 3.9 x 2.7 x 2.4 cm.  Possibly during the first cryo-run, there was still lagging nodule which has grown bigger.  I did not take the hormone treatment or oral chemo after the first cryo, which explained the existence of another lump.  Since I still have my menses every month, and my cancer is estrogen and progesterone positive, it gave the opportunity for the tumor to regrow.  Cryo was performed on December 17, 2004.  This time I did not opt for iodine seeding, on the other hand, they put in alcohol to cater for the lymphnode area.

The cryo was performed on Wednesday, and in the next three days, they infused some medication for fast recovery. Oddly enough this time, both sides of the breast engorged though we did not feel any pain.  While waiting for the t-cell to culture, we flew to Beijing for three days to visit the Great Wall of China and some other attractions in Beijing.

When we return to Guangzhou, my swollen breasts have experienced a bit of infection.  My affected breast was red and swollen and secrete watery discharge with unpleasant smell. I was given drips of antibiotics to address the problem.  In addition, the cultured t-cells were also infused.  The immunotherapy package that we chose was the cheapest one which costs RMB18,000.  Therefore, only two bags of t-cells drip was given.  The infusion went smooth, and I pray that the immunotherapy in successful, and my immune system will become stronger to fight my cancer.


While at the hospital, Prof Xu, the chief President of Fuda, who is also a liver cancer survivor, came to my room for a visit.  He has written two books on treatments and success stories encountered in Fuda, namely "Nothing but truth" and "Follow me to fight against Cancer".   I am honored to be given the opportunity to translate the books into malay.  He said. "when it's done, we can print it and you can distribute it to help cover your treatment cost in Fuda".  How nice :-) 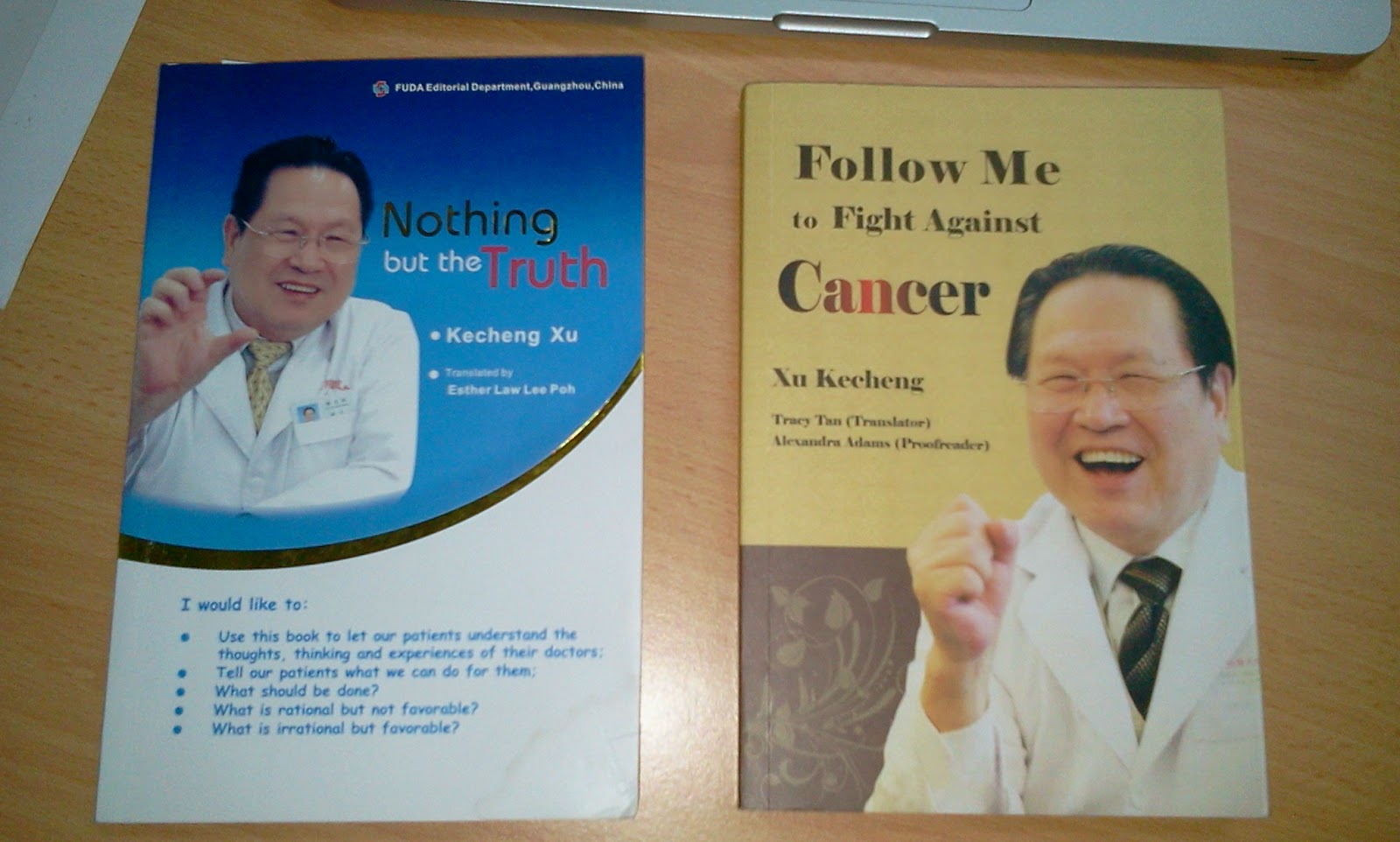 I'm now back at work.  Colleagues who have not seen me for quite sometime, were amazed that I got through this ordeal and I look really healthy and glowy.  To the readers out there, I'm just sharing my experience in this blog and I don't intend to persuade anyone to go and have treatment abroad.  I did it because it is convenient for me and I prefer a less aggressive treatment.  You are free to explore it, and in fact, three of my friends are having their treatment in Fuda now.  It is not for sure that you will get 100% cured, after all, it's Allah's willing that I'm at the stage where I'm at now.

I still go for check-ups at HKL.  In fact, I have an appointment with my onco next week.  To see the success of the immunotherapy, is quite early to tell.  As long as I'm fine and the cancer does not bother me too much, I'm thankful ~ Alhamdulillah...I still have both breasts bouncing :-)

Alhamdullillah. I am happy for you. Thanks for sharing your experience.