My eldest daughter entered a photo competition at her college recently whereby she has to narrate something about the photo. I suggested to her this picture and guess what, she won first prize for the competition. 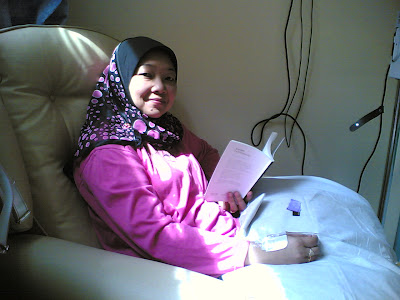 This is what she wrote about the photo :

This picture of my mother is taken two years ago in Nottingham, United Kingdom. My mom is pursuing her dream to get a PhD there. Unfortunately, after a year living there, she was diagnosed with breast cancer, the number one killer among women. However, she is a very tough and strong woman. She did not give up her PhD, instead she keeps her mind positive with determination that the disease will be cured, as Allah has stated in the Quran, every disease have their cure, unless death. That is just what makes her so special. In this picture, she is smiling even though at that time, the medicine for her chemotherapy is being infused in her veins for two hours. In the meantime, she reads the book about the disease so that the time will not fly away easily. As the sun shines behind her, we know that the hope is still there..We just have to strive and don’t ever give up..That is what she always telling me..

Two years down the road, this is my latest pic - taken at the hospital where my mother was recently warded for acute pancreatitis. She got over with it, well and fine, and we can celebrate mother's day together this weekend. 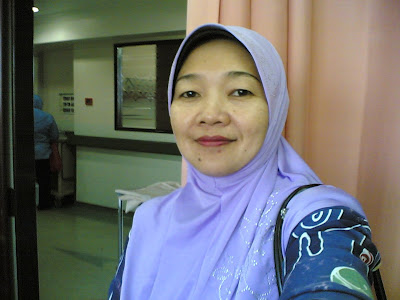 Thanks to my Nokia 6630 of which both pics were taken using it - not bad eh... the phone that I've owned for 6 years now and will continue using it till the end. Blame me on not keeping up with the technology, and in fact I have a new blackberry, but I still prefer my Nokia 6630 - a sentimental value, a gift from my hubby...