Stepping into 2013 with wrong foot!

It's February already, time really flies and  it has been 3 months already since my last posting.  Reading thru' my last posting, my wish came through - I managed to go for my graduation.  The ozone treatment worked and I was well to enough to breeze through the cold winter days in the UK.  Of course with the comfort of my sisters who joined me for the ceremony. 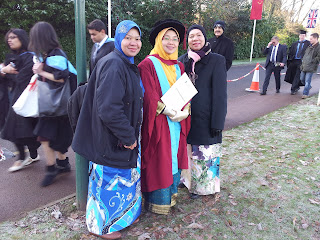 
When I came back from the UK, my daughter was admitted to the hospital for her neck surgery.  Alhamdulillah, all went well and she is now recovering with her halo fixed on to her head.  I accompanied her at the hospital for the first few days, and my husband took over for the next few days after the surgery because I was not well enough to take care of her especially when she needs to be carried to the toilet when she needed to pee.  She was admitted for around a week, and during the days that my husband was taking care of her at the hospital, I still had to drive there everyday. 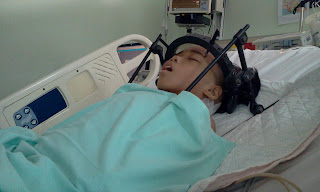 My girl after the surgery 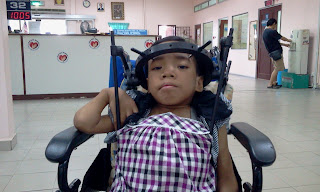 The stress has taken its toll and on 3rd January, 2013, I myself was admitted to the hospital because my tumor bled heavily.  It has been bleeding since few months back but it was controllable.  That morning, the tumor must have hit a big vein and I could not control it anymore - surrender!  My husband sent me to the emergency at HKL whereby few stitches were needed to stop the bleeding.  My Hb was quite low and I was admitted.  I didn't really mind coz' it could be a shortcut way to see the oncologist for proper treatment.  I was actually trying to set an appointment earlier, but the earliest for new case would be end of February. 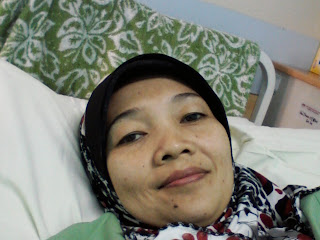 While in the hospital, they managed to do a biopsy again since I did not bring along any pathology report to prove that I have brca.  Boy the procedure was really painful, and the spot had to be stitched again once done.  Two nights at the hospital, I was well to be discharged.  They were going to set for a CT scan appointment to know the staging.  I had the CT scan done on February 8, 2013 and am quite anxious to know where the cancer might have spread to.

Like it or not, I have to go for a chemo to shrink the tumor before I can go for a surgery.  Having experienced chemo before, I thought I should take something so that the cancer didn't look bad that I have to go through a heavy dose.  B17 came into picture and starting January 8, 2013, I started to take the B17 injection, got it from my friend whose father had liver cancer and was at critical stage already when he had the B17 pack.  He only managed to take few bottles before he passed on.  I bought the rest - 54 ampoules of 3 grams each.  I had 2 ampoules everyday, injected into my vein.  Trust me, I did not do inject it by myself :-) I made my way to the clinic every night for it.