Fasting month and Eid went in a bliss.  Look at the happy faces during raya :-) 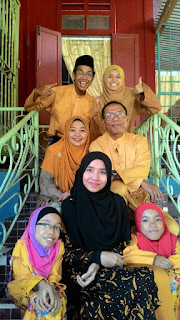 I received my b17 package around the first week of Ramadhan.  Rather conservative buying eh, first try with the supplier, I though I should not overdo la eh, kalau barang x sampai, menangis beb! 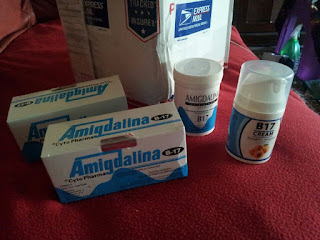 I had daily shot of 3 grams of B17 at a local clinic right after work.  Around 4.30 pm, wahhh cancer cells were starving too at that time eh! 14 shots altogether during fasting months (minus the weekends) and Alhamdulillah it shows a positive effect.  Since the screening for the hitv immunotherapy, with the tests and the touch to measure the tumor, it has started to bleed.  But now, my tumor has stopped bleeding.  I had another six shots after raya which were done while fasting too.  Pains on my back has gone, gone forever I hope! after this, just continue with two or three tablets of 500 mg amigdalin and some apricot seeds too in between.  They say must take other vitamins like zinc, vit C etc to make the b17 work.  Of course I'll supplement myself with those too.
The cream is effective as well, I apply on the affected area twice daily.
What's next?  Well, just wait and see and cherish every moment.  There is no doctor's appointment to look forward to, I'm fully responsible in taking care of myself now.  Of course I have my benchmark;  I have gone through bad times and I know the feeling. So just look for the signal and follow my intuition on what's next.  As at now, health wise I'm alright.  I can still drive long distance day or night; and infact, during third day of raya, I drove down to Kluang Johor for an engagement ceremony.  My husband has a panic attack syndrome whereby he cannot drive on the highway ~ sudah kene sampuk dengan hantu highway eh :-)  Kids can drive but they are not allowed to, so the steering is mine :-)
As long as I can perform my daily routine like sending my kid to school, driving to work, do a bit of cooking and household chores, perform my prayers, recite Qur'an at ease, I'm alright and Alhamdulillah.  Just pray that USD won't go further up or rather, ringgit won't go further down :-(  So much that I want to, trip to Fuda has to be postponed due to exchange rate.  As for now, duduk ontok2 yo lah kek sini :-)
Posted by yatibahar at 11:14

yatie, great to hear that you're in control. Hugs!

Yatie, alhamdulillah. All goes well with u. Need info on the cream. What's the cream name? I would like to apply it onto my ulcerated breast tumor