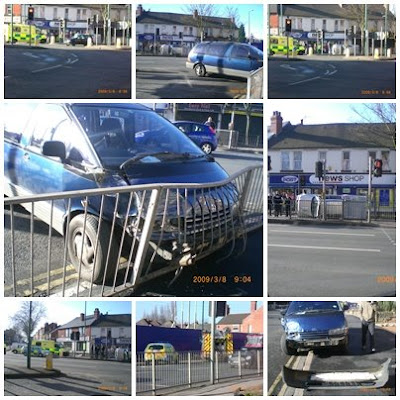 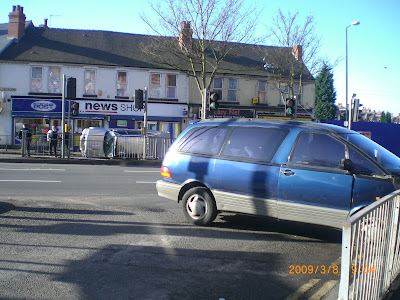 When the heat is still on about this breast cancer, another mishap happened. I thought I'd post it here since this is the blog that I'm constantly updating at this moment.

We were on our way to Calverton; the weather was really nice and we thought that we'd spend the time at carboot. At the intersection Greagory & Alfreton, when we were just about to go as the traffic light turned green, the pick up truck from our right, hit us. I was not concentrating at the road at the moment as I was trying to turn the radio volume down when I suddenly heard the loud bang! The next thing I know, the other vehicle has overturned and my kids were crying, real in shocked of what had happened. We ended up hitting the fence as per above pictures. Luckily there were a few witnesses around and they confirmed that we were on the right side as the light was green at that moment. The lady driver beat the red light and hit us. Her truck was badly damaged. She said she was going at 30 miles per hour, but looking at the damage, I doubt so. Otherwise the car would have not overturned and face the direction that she came from.
As soon as the accident happened, one of the passerby called the police to inform about the accident. Around five minutes later, the police, paramedic and firerescue came. I was quite worried about Adnin as she just had her operation. Luckily she was alright but still in a great shock. They have the comfort of Nadia who happened to pass through the area few minutes after.
My husband took a few seconds after the traffic light turned green before driving; usually turning down the volume or adjusting the gear. Had he just drove when the light was green, the truck would have hit directly at him and Adnin (who is sitting behind him). The impact would have been worse and we would all ended up at the hospital...
Posted by yatibahar at 21:18